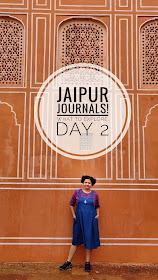 Hi fellows! How are you all doing this last week of August!? It has been a lovely month & year so far! Having said that, check out the Part 1 & Part 2 of Jaipur Journals before reading this one! As I mentioned, Day 1 was a day with a lot of sight-seeing. Well, Day 2 wasn’t that different! It was probably more taxing but covering lesser places. Shall we begin?

In this post, I will cover the most famous places in Jaipur such as Hawa Mahal, City Palace, Jantar Mantar, Albert Hall Museum & Bapu Bazaar! I will also tell you all a bit about the places we skipped just so you are informed about ALL OF JAIPUR!


Much to our misfortune, it was RAINING ALL DAY! Yes, it was frustrating! For 2 reasons; One – my shoes got wet & Two – I couldn’t take my camera with me. There are other reasons too such as ‘I have been wanting to visit Jaipur since years & when I finally get there, it is raining, nay, pouring on the day I am supposed to view the MAIN SPOTS IN JAIPUR! But, I won’t bore you with such reasons.

Picture it. 2 girls in front of the Hawa Mahal while it was POURING. Suruchi with her umbrella & I halfway inside her umbrella wearing a rain coat clicking photos with my mobile inside the umbrella & the umbrella making an appearance in the photo too. And when I tell Suruchi to hold the umbrella a bit upwards, rain starts coming in on my phone & then soon enough it gets windy with umbrella being reversed & upturned, leaving me, my phone, Suruchi, her phone all wet in a whole watery chaos! That’s how our day started! Lovely, ain’t it?

I didn’t let this upset me like it did on the day we had arrived in Jaipur. It was raining cats & dogs when we were in Jantar Mantar. It rained, I smiled through it. It poured, I danced through it. I’m not making shit up! I got pictures to prove it! But first, let’s focus on Hawa Mahal! We had allotted 1 hour for Hawa Mahal, which included taking photos from the front, doing a small tour inside it & lastly going at a café opposite Hawa Mahal to take our photos with the background of Hawa Mahal! Instead, we ended up doing the umbrella-rain-mobile circus mentioned above & moved on to City Palace in less than 15 minutes! If you visit Hawa Mahal, I insist you go to the cafes opposite it (Wind View Cafe / Tattoo Cafe & Lounge) to get the most scenic photos!

Check out some of the photos below but do not be too amazed. I had seen such fantastic photos of the place earlier, but when I actually saw Hawa Mahal, I was utterly disappointed! It does not look as grand as it looks in the photos. It looked like just another pink building in the Pink City. The mantra is to not be fooled by the photos & not have too many expectations! 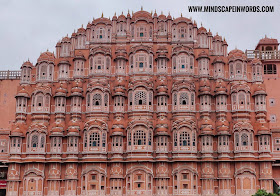 ~~CITY PALACE: PRITAM NIWAS CHOWK~~
The main spot in the lovely city of Jaipur is the City Palace. And, dare I say, also the most OVERRATED. There is A LOT TO SEE in City Palace, but they choose to show THE LEAST PART OF IT, while charging exorbitant rates for the MORE ROYAL places. I mean, you are literally the royals, why are the charges so high? This cannot be your only source of income!

First, we visited the Pritam Niwas Chowk which has the 4 seasonal gates namely The Lotus Gate (Summer), Green/Leheriya Gate (Spring), Rose Gate (Winter) & Peacock Gate (Monsoon.) From the inner courtyard, you can view the Chandra Mahal, where the King of Jaipur resides with his family. I think Suruchi & I spent at least 30-40 minutes at these Gates alone! I was looking forward to get amazing photos here & so I did!

~~CITY PALACE: SHOBHA NIVAS~~
After the Gates, we went inside the Palace to the Shobha Nivas & oh, what a beauty! It was filled with walls full of mirrors & glasses & gold! It was as royal as it gets! The royal family uses this room only once a year, that is for Laxmi Pooja in Diwali festival. We got to sit where the King sits! How awesome is that? Check out the grandeur of that one room in the photos below! 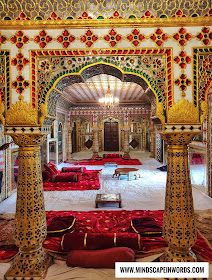 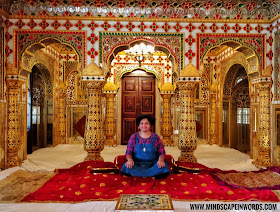 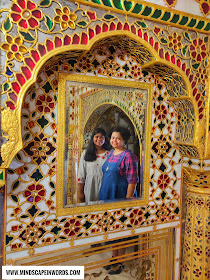 ~~CITY PALACE: GUEST HOUSE~~
Next was the royal guest house. It may not sound royal, but it sure is GRAND! This guest room was for all the guests of the royal family! It had quite an antique look which made it look like it belonged to a different era. Of course, we loved it!

~~CITY PALACE MUSEUM~~
After the all the main spots in City Palace, we visited the Museum at the end. It was a small hall filled mostly with paintings & history of the place. Not that great & definitely nothing compared to the Udaipur City Palace Museum tour!
There were a few more spots where we wanted to click photos, but since Salman Khan (Bollywood actor) was shooting a song scene in City Palace, we had to miss out on those spots. 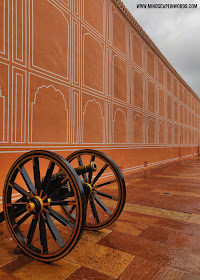 ~~JANTAR MANTAR OBSERVATORY~~
The Jantar Mantar Observatory is at a 5 minutes distance from the City Palace. It is a UNESCO World Heritage site which has a collection of nineteen architectural astronomical instruments. The area was naturally quite spread out. So, here, it was very windy & with it came the crazy rains! Because it was raining, most of the places were restricted from entry. So, I couldn’t take photos in the manner I wanted. We took a few shots & were out in 20 minutes. With my wet shoes all day long, all I wanted was to go for lunch at On The House & that’s what we did.
Here are some photos I which I’m throwing a tantrum like a kid & other in which I accepted my fate! 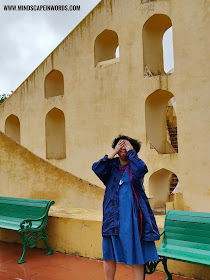 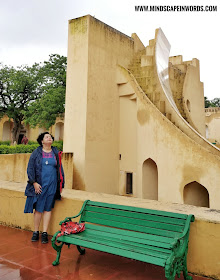 ~~ALBERT HALL MUSEUM~~
After a heavy & delicious lunch, we moved ahead for the tour of Albert Hall museum. This one was the longest & too tiring. Like any typical museum, it consisted of all typical things of historical importance. I had visited Hyderabad’s Salarjung Museum, which is the biggest museum in India. And after that never-ending & tiring yet interesting experience, I steer clear of museums! I have very little patience for it. All the items are anyway similar to any other museum. You have your armour, paintings, vases, hookah pipe (oddly everywhere!), kitchen utensils, carpets, coins, & so on! After the first floor, I was too tired, but we completed the second floor & then the basement.
The irony is that I couldn’t get a shot of the museum from the outside, because it was restricted! So, it was all for nothing!

~~BAPU BAZAAR~~
After a long day accompanied with constant rain, dampened clothes & wet shoes, we went to Bapu Bazaar with little enthusiasm for shopping. Nevertheless, we gave it a try. The only nice thing here is that all the lanes are Pink. Similar yet unique. But, all of them are in little stores where they have fixed prices. So, we didn’t bother to shop because we had no energy to bargain. The streets are really nice for a walk though, if it isn’t raining incessantly.

~~OTHER PLACES IN JAIPUR~~
As I mentioned before, we skipped a few places because they weren’t as amazing as others, in my opinion & some of them were very far off! You can check out these places if you have the time!
Jaigarh Fort
Birla Mandir
Galtaji Temple
Samode Palace 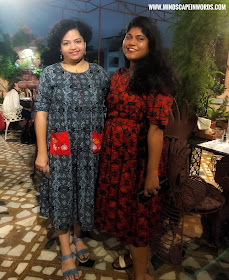 To sum it up, we had a lot of disappointments; restricted entries at Jantar Mantar & Albert Hall Museum, expensive tickets at City Palace & not doing the whole routine at Hawa Mahal. All of this combined with rains (have I mentioned this enough times?) made the whole day tiring. But despite the challenges, we ended up having a great time! I think more the setbacks, more it gives you opportunities to say screw it all, let’s roam around anyway!!

Day 2 was shorter than Day 1, but it became quite intolerable & we ended up more tired than the day before. We almost caved about not going out for dinner. But, since it was our last day in Jaipur, we had to go out! We had one disappointing meal on the last night at Peacock Rooftop restaurant.

Check out the next post about restaurant recommendations here! Stay tuned! 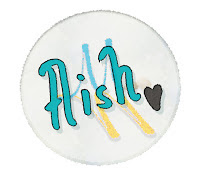 Aishwarya Shenolikar at 9:03 am